Dreaming of a white Christmas? Yep, we had a white Christmas but with white sand instead of white snow! After almost a year of planning (well booking in advanced), we were back to Hawaii for the 2nd time and what was better was: we spent Christmas and New Year in Hawaii! Where shall I begin with our 17 days amazing journey from the North Pacific to the South Pacific?

Getting there wasn’t easy especially on Christmas’ Eve! Our flight was at early in the morning at 6 am with United (already saving points for our next trip) so at least it helped a little bit in terms of holiday travel traffic but still who would’ve thought of closing two lanes on I-93 for some construction maybe on the early morning of Christmas’ Eve? We were stuck in traffic for 10 minutes or so. fortunately, we still made it to the airport on time! Going through security was a lot easier than I thought on Christmas’ Eve, they opened the TSA pre-check line for regular travelers like me 🙂 We went through security like a breeze! Our flight from Boston to San Francisco was on time; we had less than 1.5 hours connection so I was really walking fast. BUT guess what? There was a flight to Las Vegas ahead of us in the same gate, all the passengers are already boarded and waiting for….the pilot to come over from another flight!!!! Our flight was waiting for this plane to get out of the gate so we can board…and we waited for 2+ hours!!! SERIOUSLY UNITED??? If they knew the pilot is going to be late, why they would start boarding a flight? Can’t they push the plane out to somewhere and let us board first? Can’t they switch us to another gate? There were plenty of unoccupied gates around us! I just couldn’t believe it (with a logistics background) who in the world would schedule something like this? I can understand holiday travel demand and unforeseeable mechanical issues but this is totally a poor scheduling problem! Our flight was suppose to be landed in Honolulu at 2:49 PM, I purposely paid extra for this flight because of the extra day time hours when I arrived in Honolulu to be settled in before our Christmas’ Eve dinner! United totally ruined my plan….we landed at almost 5:30 pm, picked up our rental car (Thrifty 2 days rental $118.79 it was the lowest I can find during the Xmas time and I booked earlier in the year too!), and by the time we checked into our room, we missed the sunset 😦

Last glimpse of sunset from our ocean view room at the Sheraton Waikiki: 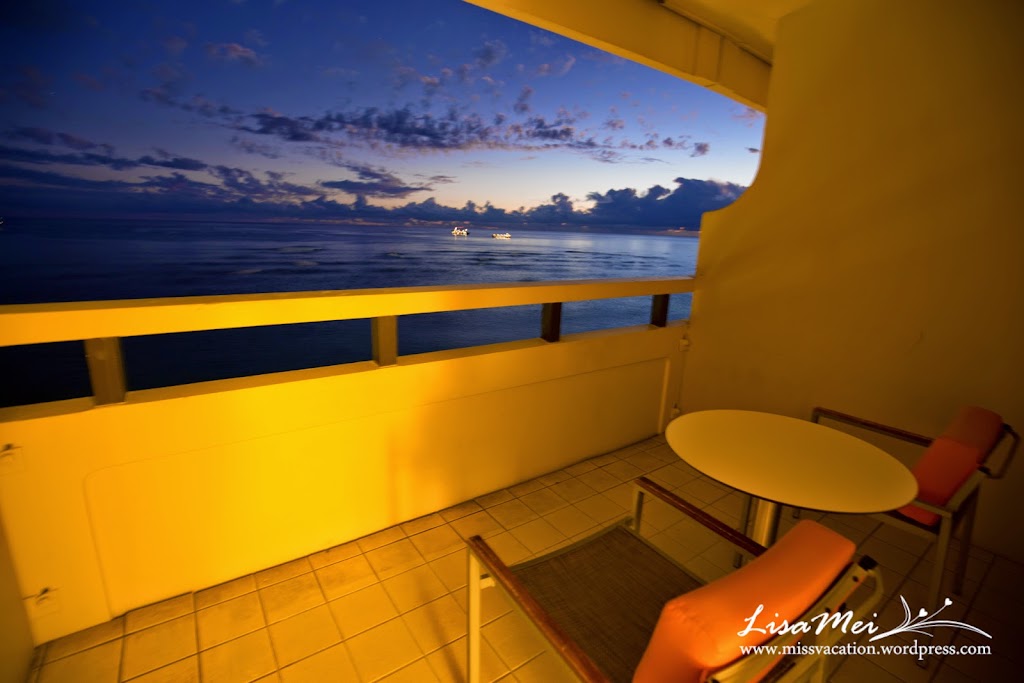 The view from our room was unbelievable, we would love to spend extra hours in this room! Finding the hotel wasn’t too easy, do not rely on the GPS!!! It was tucked behind the mall on Royal Hawaiian Ave; it’s not on Kalakaua Avenue! The hotel is huge unlike the Sheraton Princess Kaiulani we stayed in last time. I asked for a high floor room but since we got there so late, all are taken, our room was located at the 7th floor; it’s still high enough to have views! The views were awesome, probably the best view room we ever received on discounted rooms! The room was spacious and clean:

They only had double beds left: 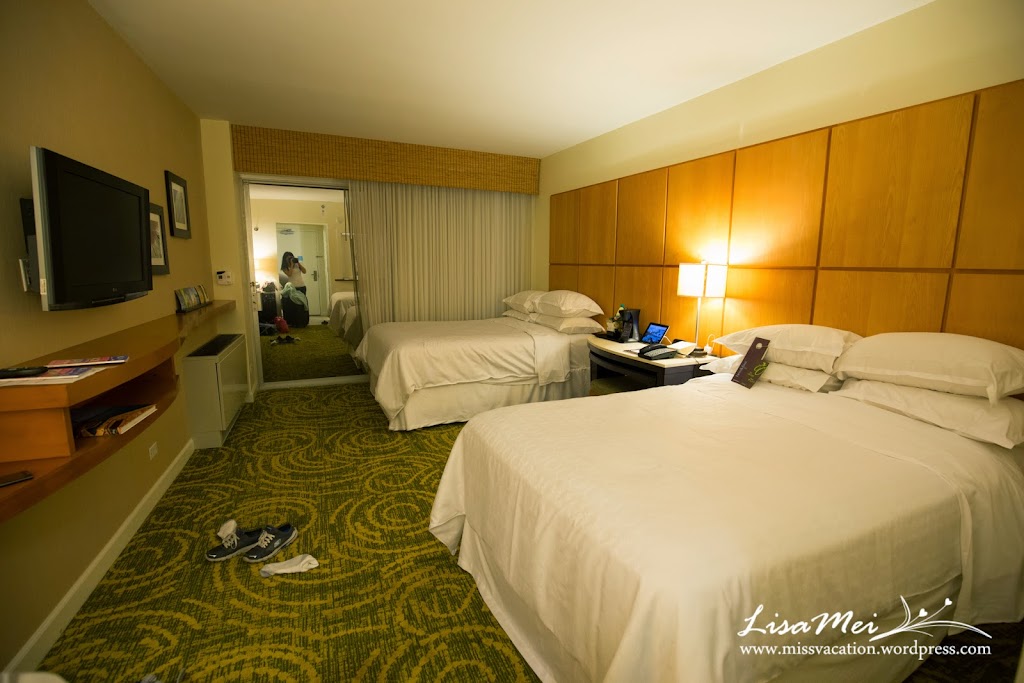 The bathroom was large: 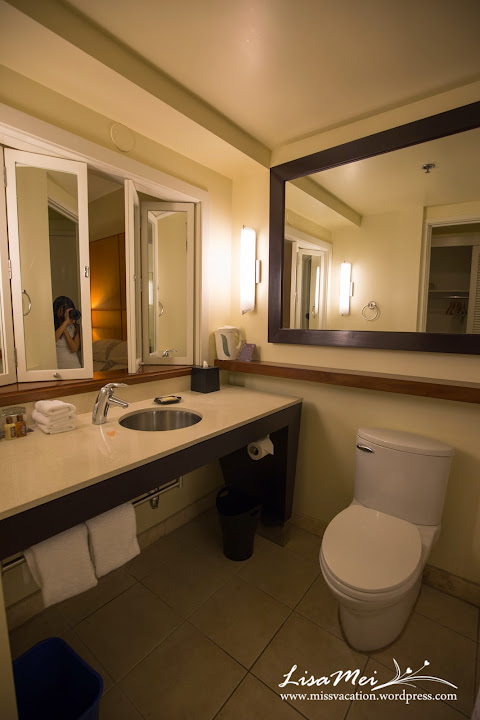 Hubby said the tub could be nicer for a 5*: 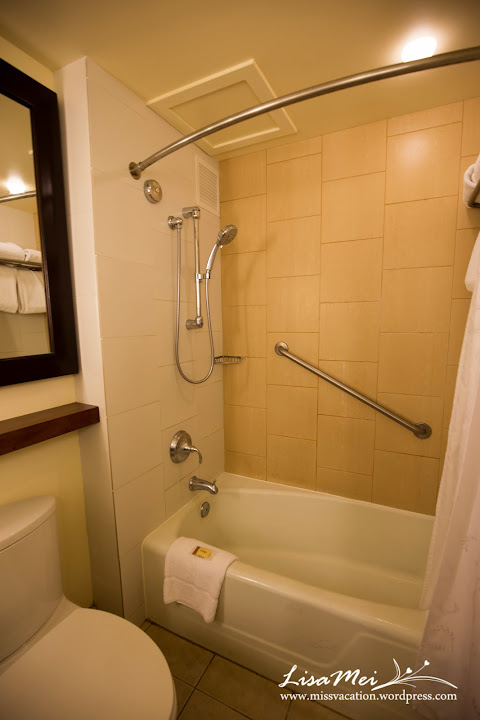 There are two fan doors that can be opened: 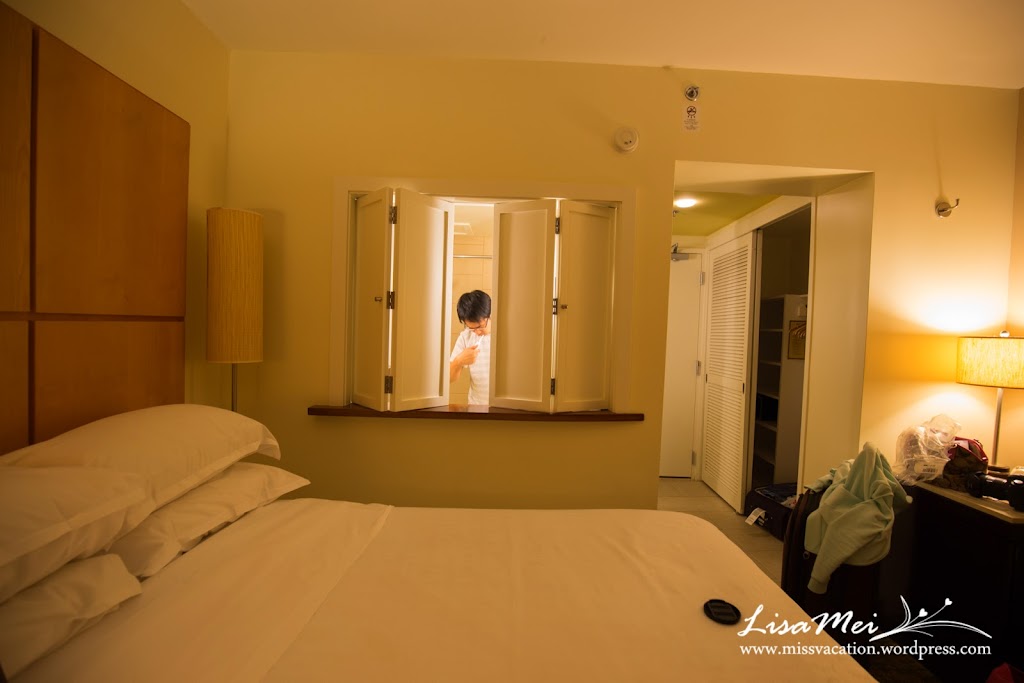 There was even an iPad there to use with a note said if removed, the hotel will charge $700 for the iPad and $100 for the charging cable! 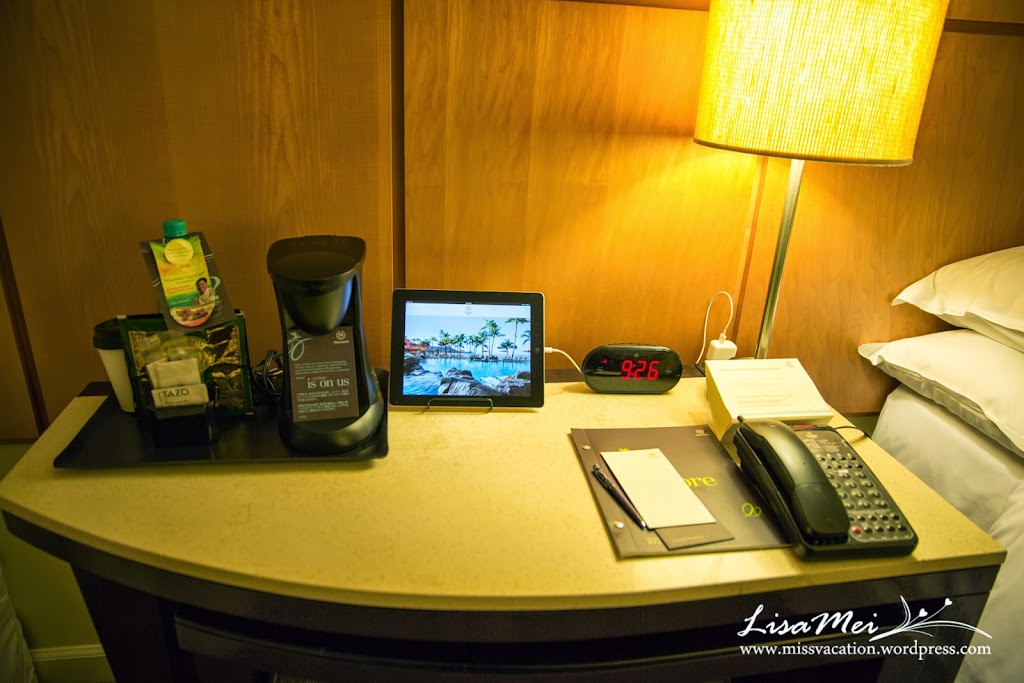 From our deck, we could see the infinity pool; the pool at night was lit up, it was so nice! Noise was not an issue for the 2 nights we stayed over Christmas! 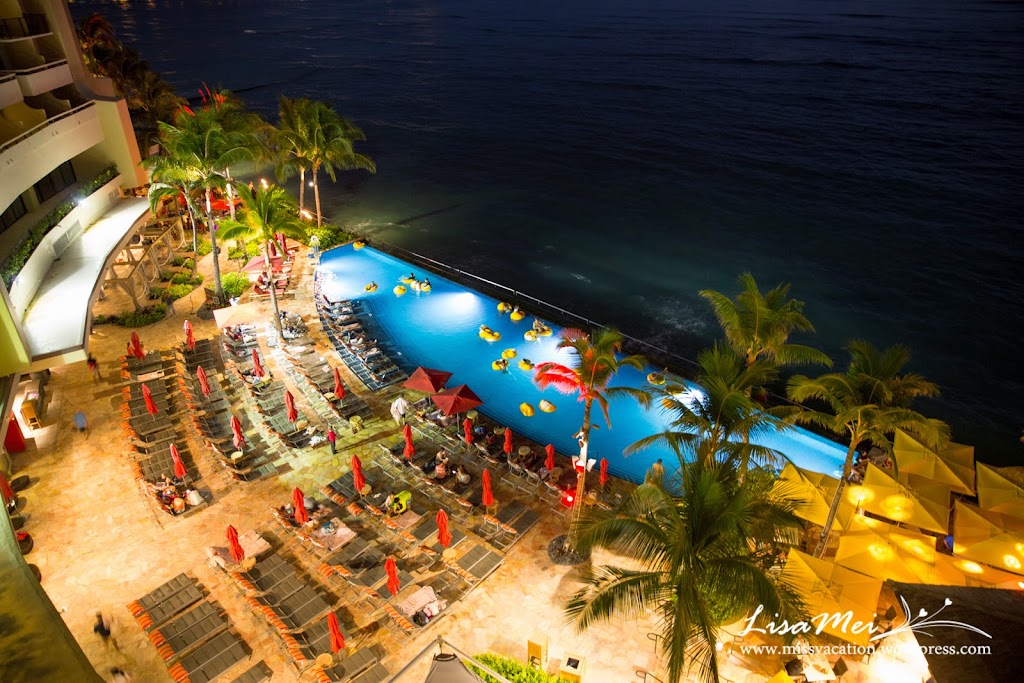 And the view of Diamond Head as the backdrop! 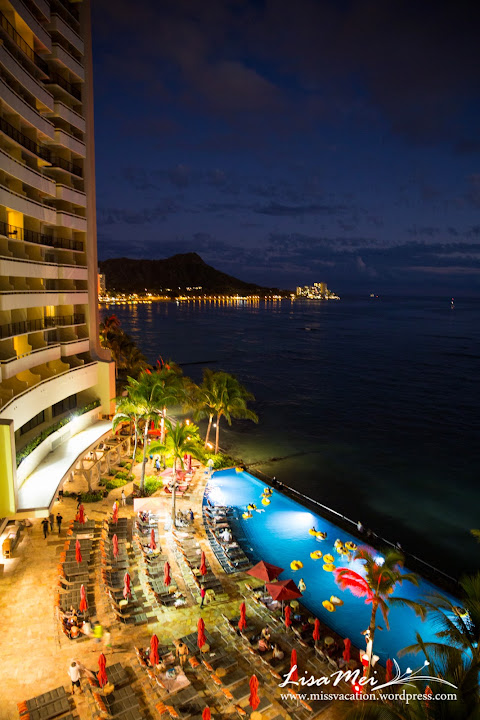 I didn’t have much time to take more photos of our view since we need to head out for our Christmas Eve dinner. We walked back to the huge parking garage to pick up our car and then drove to Camellia Buffet 930 McCully St Honolulu, HI 96826. It was a tough decision to make on Christmas’ Eve and Christmas’ Day dinners since there are so many great restaurants in Honolulu. We picked Camellia because their marinated meats were very delicious (we dined here two years ago) and thought it was a great value for unlimited Korean BBQ! It was a little bit different this time, due to change in Hawaiian regulations (according to their sign), we were no longer able to take raw meats ourselves; there was a guy there who served us….just point to him what and how much (still unlimited)! 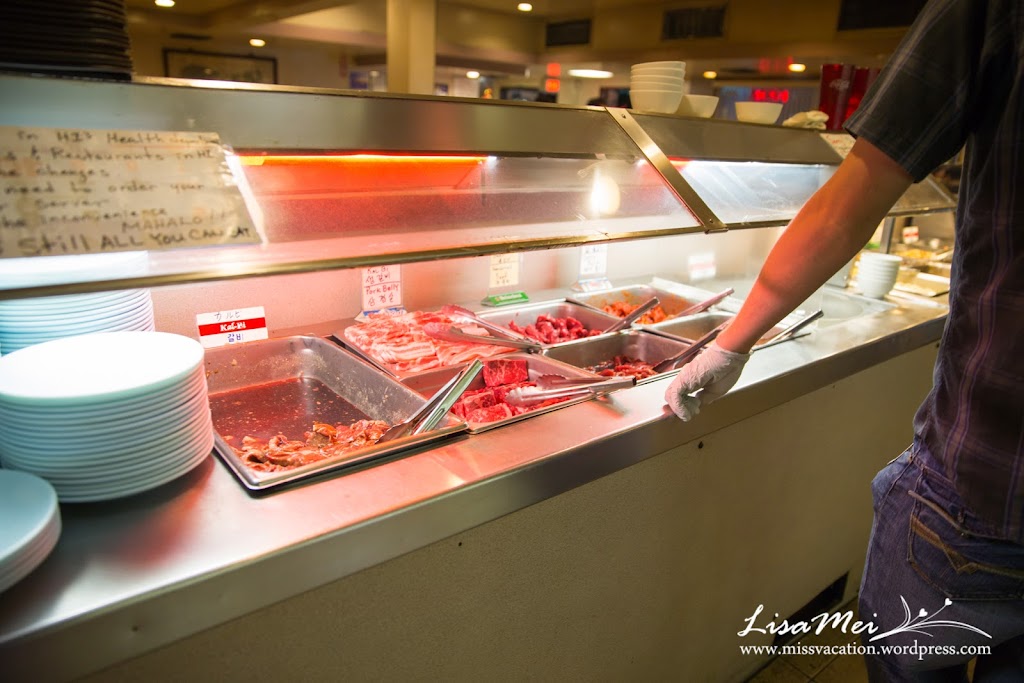 Kalbi, bulgogi, spicy pork, chicken, you named it! But they didn’t have shrimp this time! The Korean side dishes, you can just take whatever you want: 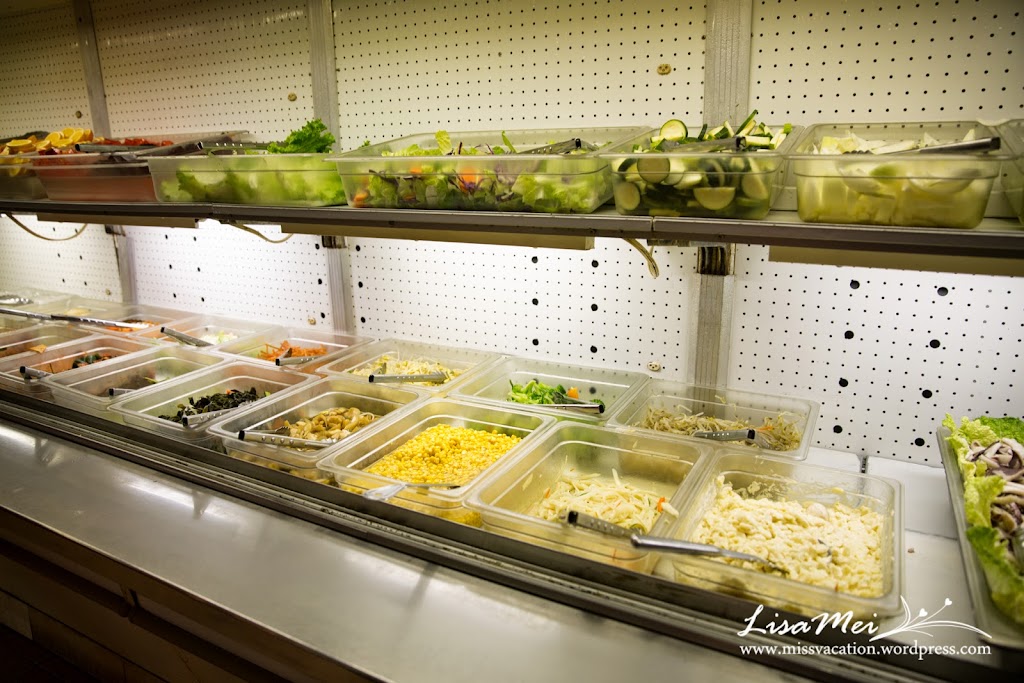 and a little cooked food area: 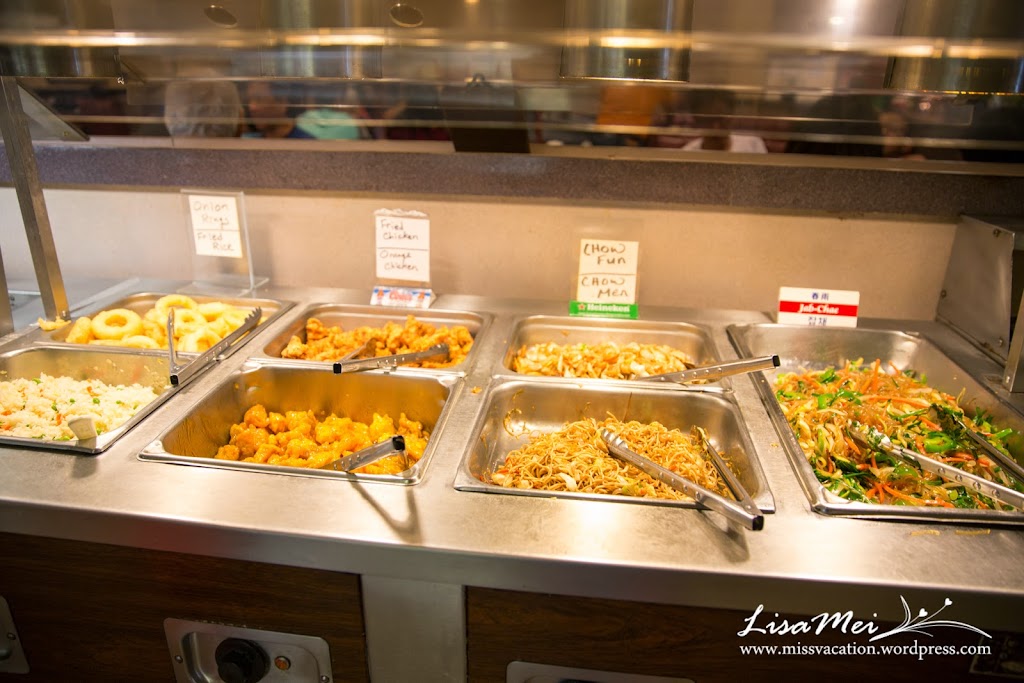 Let start our meal, we were so hungry after the long flight (and they don’t serve any food since it’s domestic flight…cheapo US airlines!) I bought a meat sandwich and buns with me on the 10+ hours flight! 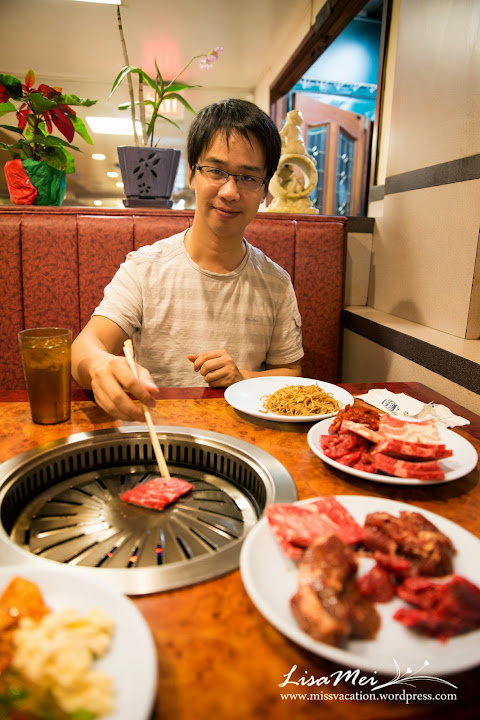 Service was a bit slow, it wasn’t that busy though. We had to wait and called the guy to swap the grilling pan when it is burned. We had him swapped two times in the course of our meal! 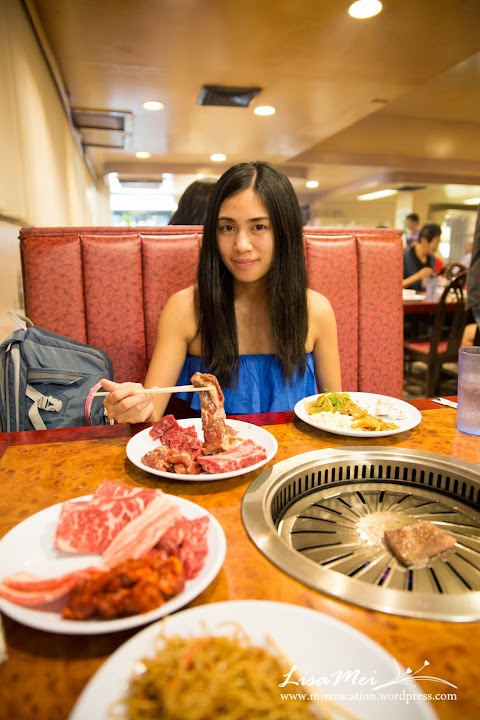 We went back to park our car and had a little nice walk around Waikiki shops, surprisingly many stores are opened on Christmas’ Eve, I guess it’s tourist area! The beautiful night lights and wearing my flip flops – so comfortable! We walked over to my favorite ABC store to stock up on some juices and dried fruits to bring home as souvenir! 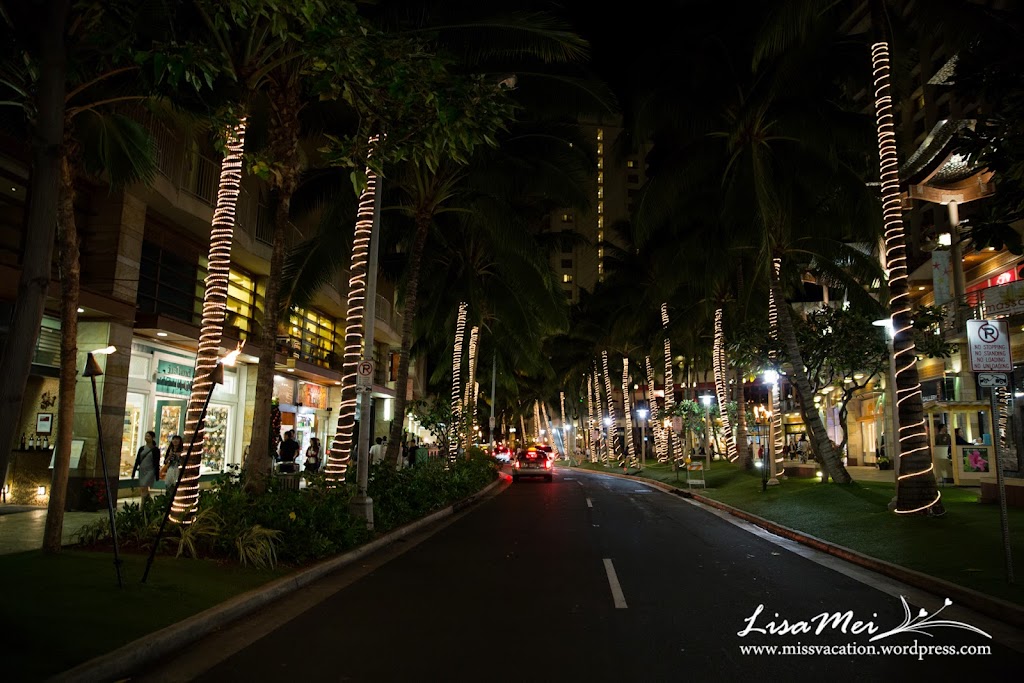 The hotel is located behind this Royal Hawaiian mall! 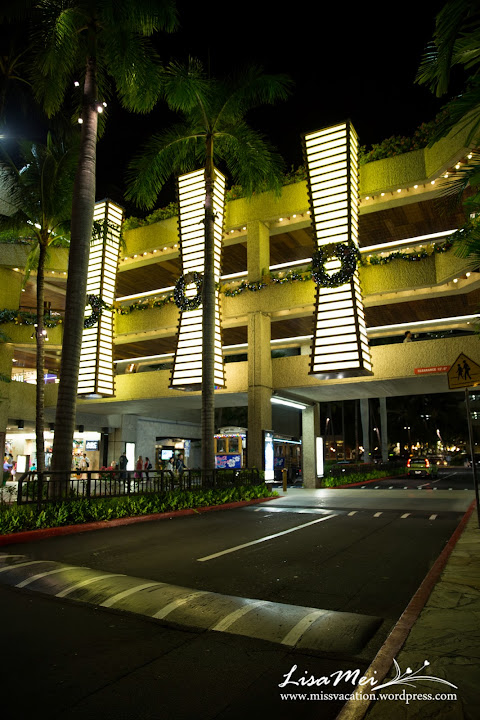 Everywhere was so well decorated, I love Christmas in Hawaii! 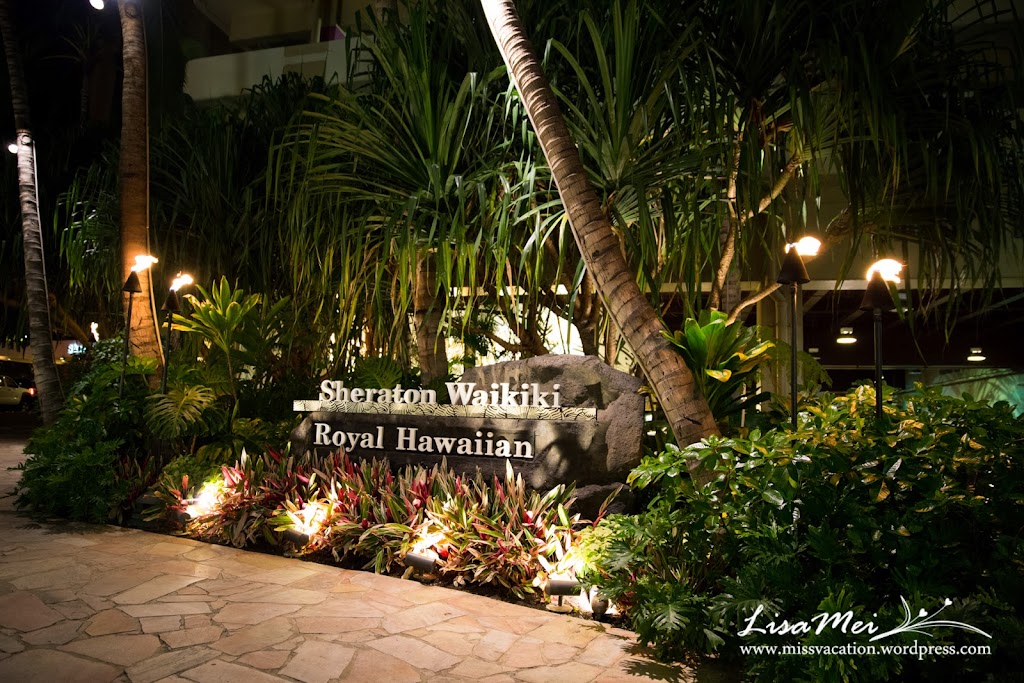 There were sand sculptures around the hotel; Santa in a convertible was on the front entrance: 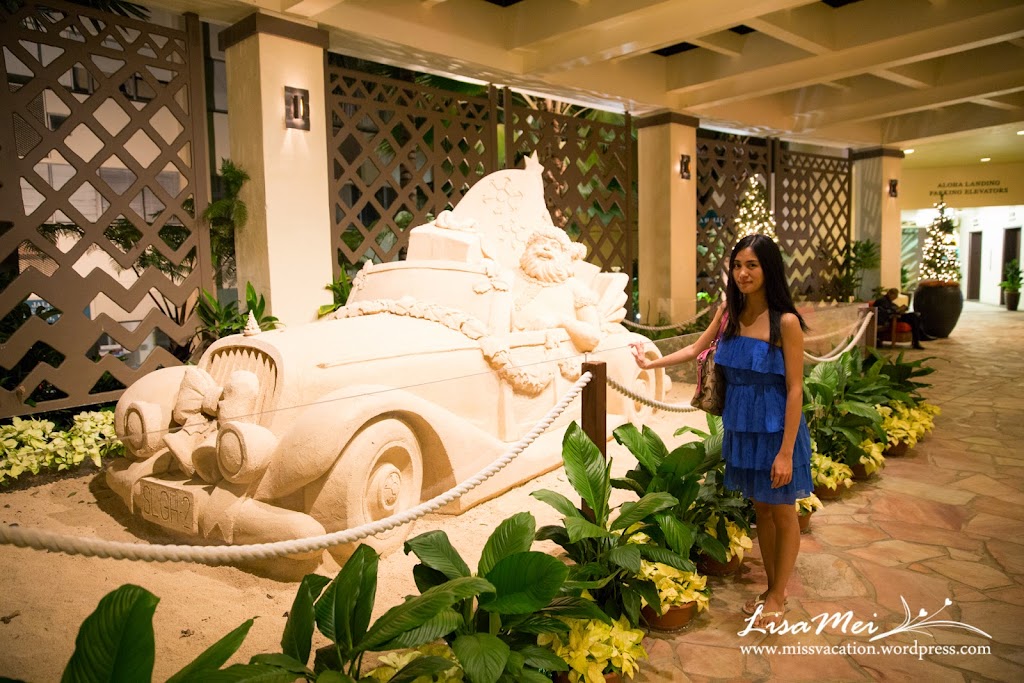 Did I mentioned that the hotel is huge? The entrance is like a mall itself with shops surrounding it! 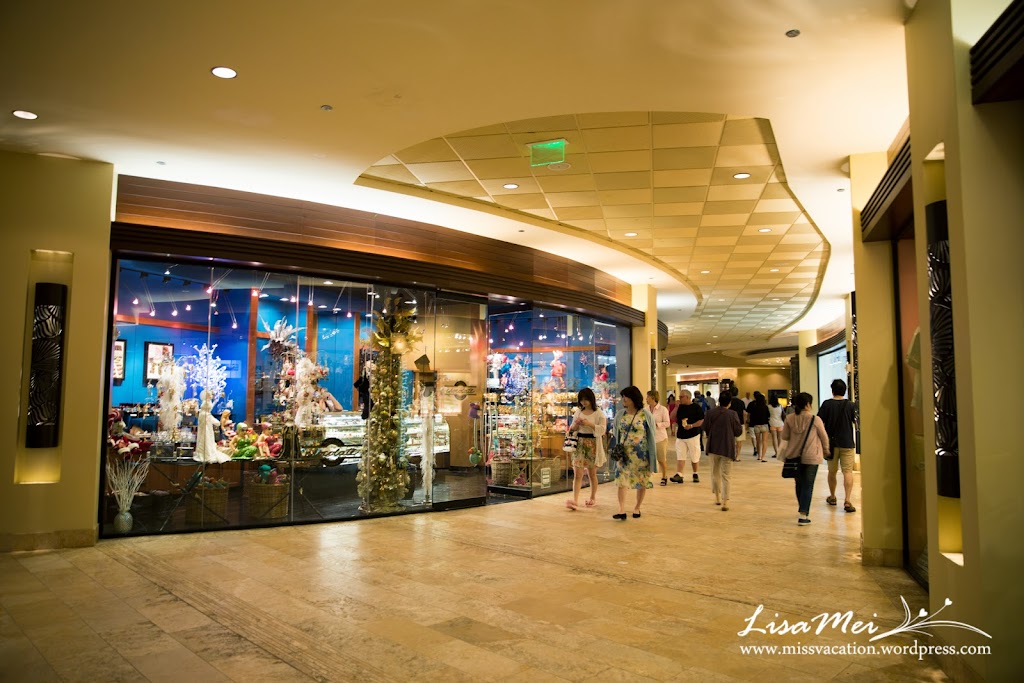 Had to walk through that busy corridor before the hotel reception: 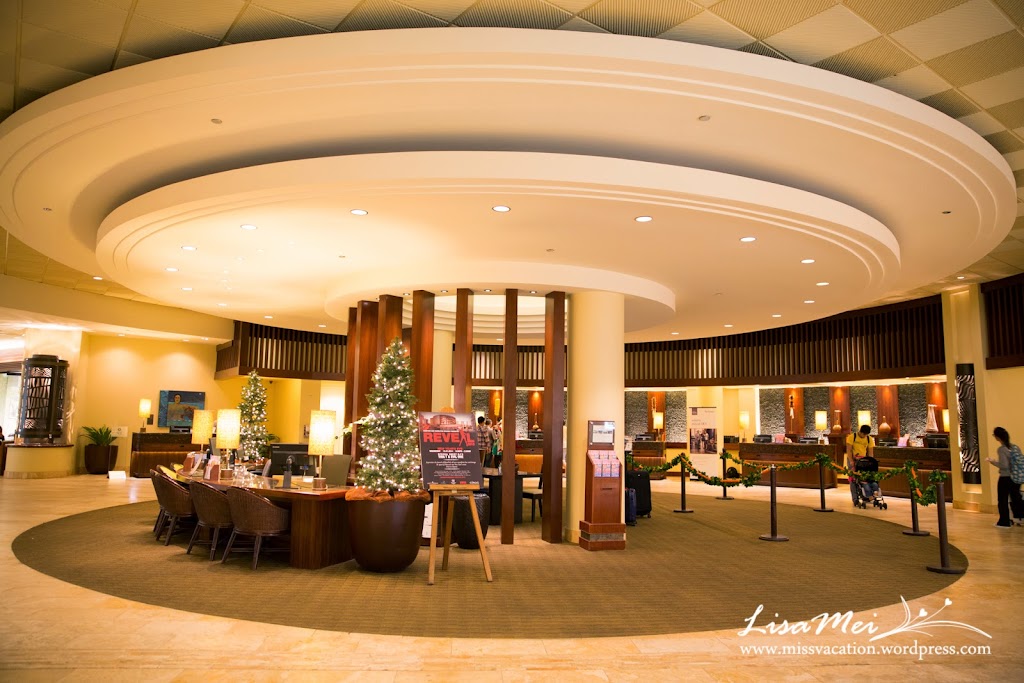 Since the hotel is huge with hundreds if not thousand of guests, they have 10 elevators!!! You need to press the button in the center piece table and wait for the elevator….reminded me of a game guessing which door has the prize LOL! 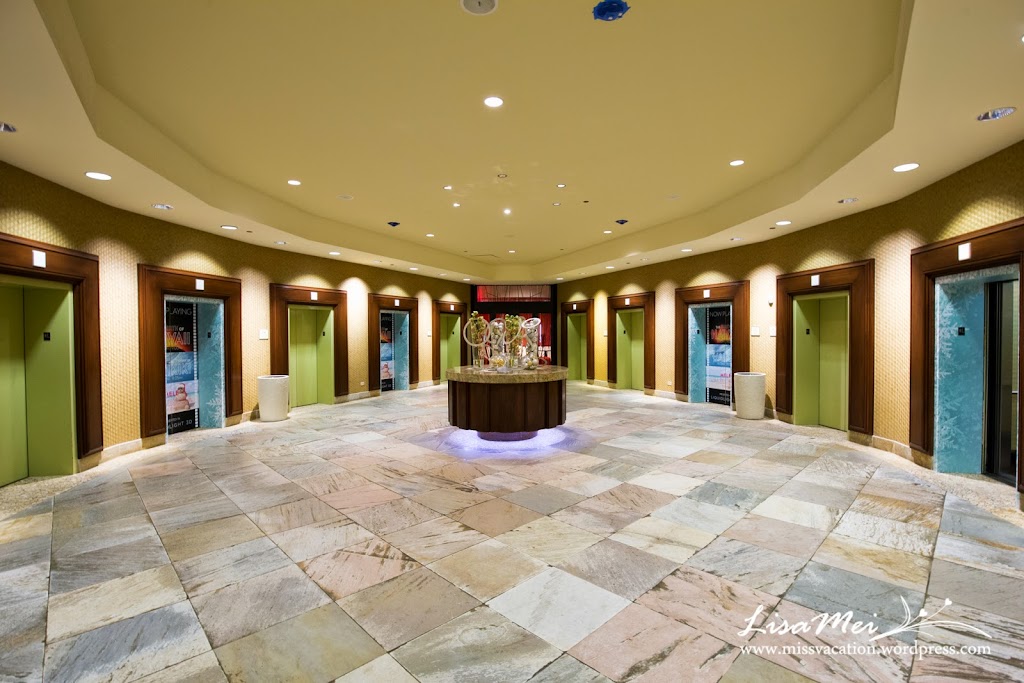 We went back to our room, shower, and then off to sleep because we were so exhausted from the flight. Tomorrow will be our only full day in Oahu before we ventured out to the Big Island! We really didn’t have much plan in terms of sightseeing in Oahu since this was our 2nd visit but we are overbooked with food: shrimp truck, dim sum, and so on! Good night, I still can’t believe that we spent Christmas in Hawaii just like a dream came true! Merry Christmas everyone!